My second-earliest attempt at creative writing occurred when I was about twelve years old.

It was during sixth-grade English class. The teacher stood at the front of the class holding a book and reading aloud a short science fiction story, one of the rare occasions that this genre popped up in my twelve years of public education.

My memories are fuzzy but here is the gist of the story: a group of astronauts in space suits were exploring a new planet, and they came upon an alien city in decay, with no evidence of living inhabitants. Moving through the ruins the group is surprised to find a structure still standing, and they enter. They find an airlock apparently still sealed and look through the glass portal. They see a bizarre creature sitting motionless at a strangely-shaped desk.

After discussing the situation the astronauts decide to force their way into the chamber. When they break the seal on the airlock there is a puff of atmosphere and the creature instantly disintegrates. The leader of the group moves to the desk and finds a notebook with a great many pages filled with words, apparently written by the new pile of dust in which he is standing. He flips to the beginning of the notebook and starts to read…

The teacher closed the book and told the class that our writing assignment was for each of us to use our imagination, pretend that we were the creature and write down the story that the astronaut found in the journal.

I had questions. They only found one ancient resident in the entire city? How did the airlock stay sealed for apparently centuries while the rest of the city deteriorated? Why did the astronauts break in to a sealed chamber containing a perfectly-preserved specimen of intelligent life on another planet? Were the astronauts morons? What were the odds that the creature’s manuscript was written in English?

The teacher said “Okay, that’s enough, everyone get to work.”

This essay would be much more interesting if you could now read my version of the creature’s journal, but I have no record and no memory of what I wrote. I remember the story and the setup for the writing prompt, and always thought it was a great way to engage the students and encourage creative thinking and storytelling.

I don’t know what grade I received for the assignment. As a writer today I’d like to think that I aced it, that I wrote a well-crafted and entertaining post for the Ancient One’s blog and received an A+ for my effort.

I do, however, possess an original document from what I believe to be my earliest attempt at creative writing. My mother saved it in my “school papers” for several decades before suddenly deciding she no longer had any use for it. She stuck it in an old frame and gave it to me as a Christmas present several years ago.

Apparently this classroom assignment was to write a few paragraphs of a story using double-letter “o” words, which are underlined in the document (see the image, below). Here is a transcript complete with spelling and punctuation errors as originally composed by the author:

Once there was a boy scout named Bill Ram, he was going on a campping tripp. His mother said Goodby as he got on the bus.

When he got there he new the first thing to do, cut fire wood, as he was doing this he cut his foot.

So he decided to cook his food. He was looking at some birds when he burned his food, he looked around. He saw a Gun, he picked it up and fired it, it back fired and put out his tooth, finally it was night time. His face was full of bugs, the moon kept him awake. finally it was time to leave. When he got off the bus he was glad to be home.

The teacher corrected the errors in red ink, and wrote at the bottom of the page “This is interesting.”

This gripping wilderness saga of the heroic struggles of young Bill Ram clearly indicates the paranoid darkness in the mind of the eight-year-old author. Perhaps this story also served as a cautionary tale, a warning for my parents to keep an eye on their troubled oldest child.

We can extrapolate the literary style and content of the Bill Ram adventure and theorize about the nature and tone of the missing “What the Creature Wrote” story, written by the same author four years later. Clearly the journal would have chronicled a horrific, civilization-ending apocalypse that destroyed the city, decimated the population, and made the creature-writer very uncomfortable.

One final thought: As I read again my childhood story of Bill Ram’s dismal camping experience I realize that it suggests the origins of what later became a central theme in my adult life philosophy:

“I don’t know if the glass is half empty or half full, but when someone knocks it over I’m the guy who will have to clean it up.” 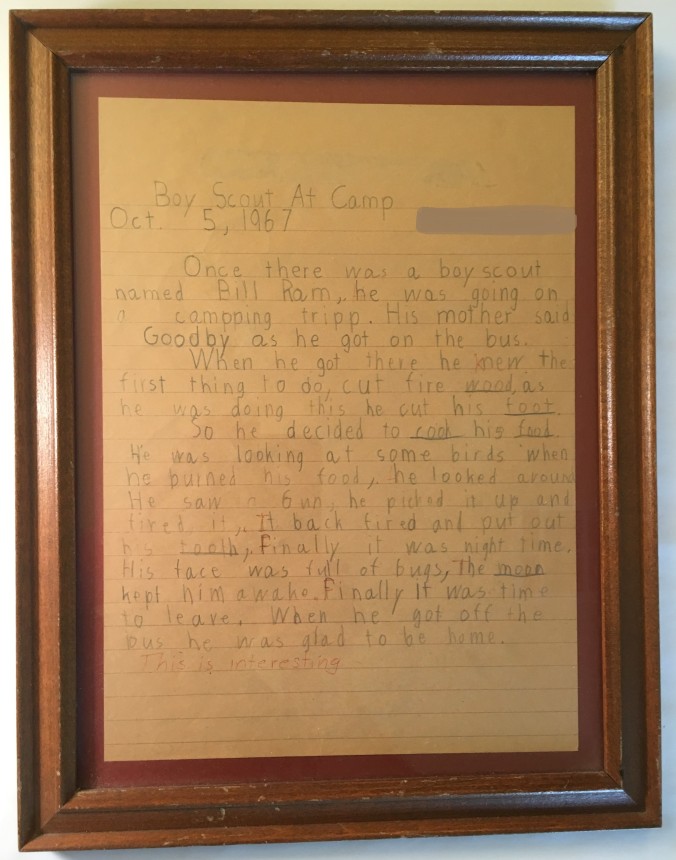